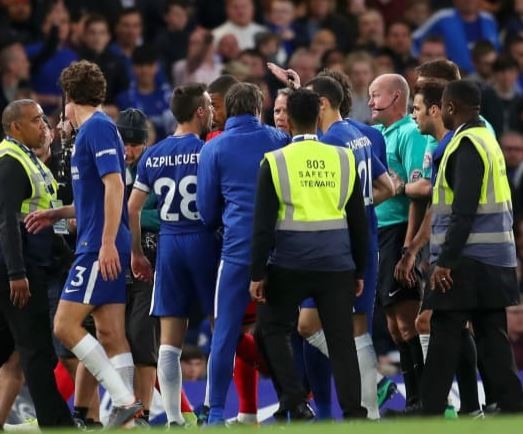 ??Chelsea FC have been charged by the FA for failing to control their players during their 1-1 draw with Huddersfield Town at Stamford Bridge on Wednesday night.

The draw at home sealed the Terriers place in the Premier League for 2018/19, but did no favours for the Blues, who now look set to miss out on Champions League football.

During the clash, Chelsea players were displeased with their opponents’ perceived gamesmanship throughout the evening, but tensions boiled over after referee Lee Mason awarded a corner during stoppage time only to blowing his whistle for half-time just as the Blues were about to take it.

Things got out of hand as several players approached the match official to protest, joined by their manager Antonio Conte. There was even need for stewards to get between the players and the referee as Mason tried making his way off of the pitch at the interval.

The FA have since levelled a charge against the Blues, with a statement (via the ?Daily Mail) reading: “Chelsea have been charged with failing to ensure their players and/or officials conducted themselves in an orderly fashion. The incident occurred at half-time of yesterday’s game against Huddersfield Town. Chelsea have until 6pm on Tuesday [15 May 2018] to respond to the charge.”

Antonio Rudiger had to be dragged away from remonstrating with the match officials by Blues coach Carlo Cudicini, while Cesc Fabregas and Cesar Azpilicueta were also heavily involved.