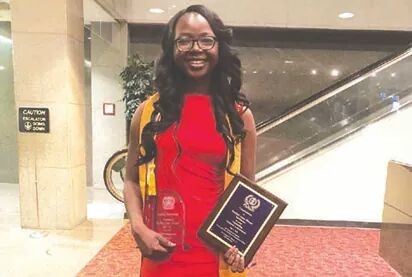 Jones-Wonni who was declared by the university authority as best graduating student on May 5, 2018, got her admission in 2014 after making the best result in the Senior Secondary School Certificate Examination, SSCE, at the Word of Faith Group of Schools in Abuja and was also the best student at age of 14.

She hails from Arogbo in Ondo State and was one of the children from the Niger-Delta states that sat for a special exam conducted by KAPLAN in Lagos to select the best to study in the university under the PAP, by a former Coordinator and Adviser on the PAP to former President Goodluck Jonathan, Hon. Kingsley Kuku.

She was initially granted admission by the University of Alabama, Birmingham, USA, at age 15 to study Medicine, but could not make it to the school due to late resumption.

She therefore settled for Miles College in Alabama to pursue her first degree in Biology. Born on October 23, 1999, she started her education at Banky’s Private School in Abuja, where because of her intelligence, she was asked to enroll for the common entrance at primary three. She made the best result and was admitted into Word of Faith Group of Schools in Abuja, where she sat for the 2013/2014 SSCE and had an outstanding result with ‘As’ and ‘Bs’ in all her subjects, and was made valedictorian of the year.

“I want to express my gratitude to God and then to the Federal Government through the Presidential Amnesty Programme, PAP, to avail me of this opportunity to gain admission into Miles College in Alabama to pursue my first degree in Biology. “Today, I have successfully completed the programme, I thank God for being with me throughout the programme, and He crowned my effort. I was not expecting this but I thank God.”

Meanwhile, Howard University, Washington D.C, USA, at the weekend granted her admission to study medicine, where she will become a trained neurologist and surgeon soon.