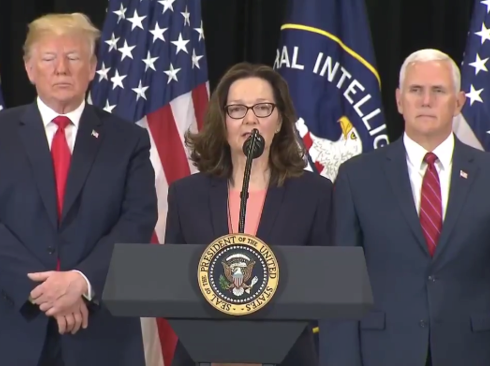 Gina Haspel, 61, is being sworn in as the CIA’s first female director.

The ceremony took place on Monday morning, May 21, at agency headquarters in Langley, Virginia, with President Donald Trump in attendance.

Gina Haspel will be the first female director in the 71-year history of the agency. The 61-year-old, who has been a CIA employee for 33 years, won Senate confirmation last week after overcoming concerns about her role in the agency’s use of harsh interrogation techniques after 9/11.

Her nomination was controversial due to her history at the CIA, including her oversight of a secret “black site” in Thailand in 2002 where suspected terrorists were tortured, and she wrote a 2005 order, at her supervisor’s request, to destroy 92 videotapes that showed CIA agents waterboarding prisoners.

Haspel was backed by many in the CIA rank and file and senior intelligence officials, including former CIA directors and national intelligence directors. Opponents argued it was wrong to reward someone who supervised a covert detention site in Thailand where terror suspects were harshly interrogated.

But  Haspel promised senators at her confirmation hearing that she would not restart the torture program if confirmed as CIA director, even if pressed to do so by President Trump. Trump has said in the past that “torture works” and that he would consider using it again.