For the first time since Dr. Olusegun Obasanjo launched his movement to stop a second term for President Muhammadu Buhari, he got a public response from his one time political ally yesterday.

When yesterday President Muhammadu Buhari raised the question as to the availability of power in the country after huge resources were spent on the sector, it inevitably brought to fore, the face-off between him and his one-time supporter and patron, Dr. Olusegun Obasanjo.

The setting for Buhari’s verbal assault was understandably political. The forum was a reception for members of the Buhari Support Organisation, BSO led by Col. Hammed Ali (rtd.) who had served as Buhari’s chief of staff before the president’s inauguration in May 2019.

Though President Buhari did not mention Obasanjo by name, the innuendo was evident as he asked: “where was the power after a former president claimed to have spent $16 billion on the project?”

President Obasanjo had drawn the first blood when he earlier this year launched a broadside at the president over perceptions of clannishness, incompetence among other failures in the management of the country.

In a January 23 special press statement, President Obasanjo while summarising the failures of the present administration had called for a third force outside of the ruling All Progressives Congress, APC and the opposition Peoples Democratic Party, PDP to salvage the country. 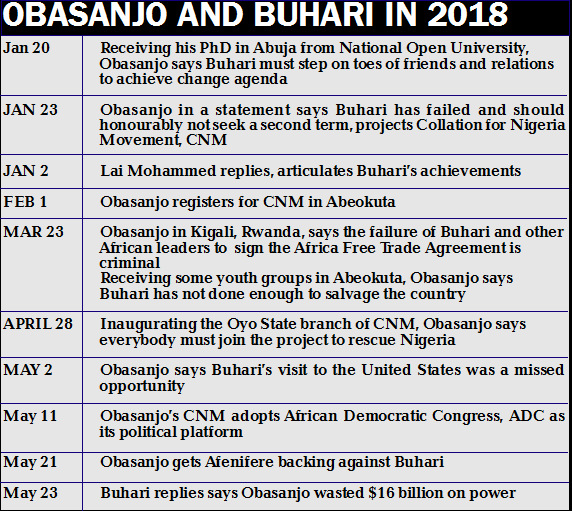 He particularly appealed to the youths of the country. He had said:

“Last time, we asked, prayed and worked for change and God granted our request.  This time, we must ask, pray and work for change with unity, security, and progress,” Obasanjo said in that statement.

Obasanjo had followed suit with several engagements aimed at mobilising his Coalition for Nigeria Movement, CNM into force, sometimes openly provoking the thought of the populace on the failures of the incumbent president.

Besides launching the CNM, Obasanjo has also travelled far and wide within the country reportedly mobilising support for the movement against the return to power of the incumbent president.

The initial response from Buhari was a communiqué from the minister of information and culture, Alhaji Lai Mohammed in which the administration articulated its achievements in office. That response was civil and engaging.

That was not enough to dissuade the former president who apparently may have reached the reached the point of no return in his quest to address the crisis in the country.

It is a sort of irony for President Obasanjo who about this time in the last election cycle took an equally controversial role in mobilising support against the aspiration of President Goodluck Jonathan for a second term.

This is indeed not the first time that the two men have engaged themselves in opposite sides in an electoral contest since the advent of the Fourth Republic.

Buhari who has contested in all but one of the presidential elections of the Fourth Republic (1999) directly challenged Obasanjo’s bid for a second term in 2003 and was defeated in that election. Subsequently, Buhari was defeated in 2007 when he stood against Obasanjo’s chosen successor, Umaru Musa Yar‘adua.

Obasanjo had almost come out of his attacks on his successors almost coming out at all times almost unscathed. When he fell out with President Goodluck Jonathan, the former president did not directly attack his former benefactor’s personal integrity as Buhari has now done.

“I don’t want to know whether to call it deliberate lying or ignorance. These are issues that can easily be verified. The first time the issue came up it was during Yar`adua era, and it was also in the National Assembly. “First, Obasanjo never claimed to have spent $16 billion on power; it was those who wanted to demonise him that claimed it.

“What I know for a fact was that when this $16 billion was being bandied about, Obasanjo’s senior special assistant on power, Summonu wrote a memo to the late President Yar`adua that all that was spent on power was roughly about $6.4 billion, that the figure that they were bandying about was outrageous. Yar`adua then sent the memo to one of his top advisers and the guy then calculated the salaries, recurrent expenditure, overhead expenditures and all that was spent in the Ministry of Power from 1999 to 2007, bundled it with the $6.4 billion and came up with this outreagous sum.

“This was what Yar`adua was talking about. Any conscientious president would have availed himself of the facts,

“But I am sure Obasanjo is capable of accounting for himself and I am sure he will do so robustly.”