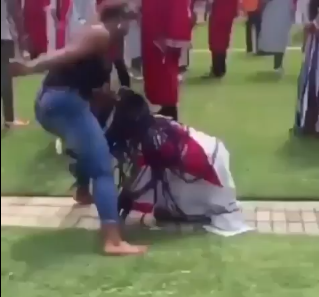 A disturbing viral video shows a girl getting beat up by another girl at their graduation.

The incident reportedly took place at Martin Luther King High School in Deklab County Atlanta, Georgia. During the graduation, while graduands were clad in their white and red graduation robe and cap, a girl attacked one of the graduands and beat her violently while others watched and made no move to separate them.

According to online reports, the attacker is a junior girl who had a beef with the graduating senior. She had been trying to get hold of her for weeks but didn’t get the chance, so she waited for graduation day to attack her. 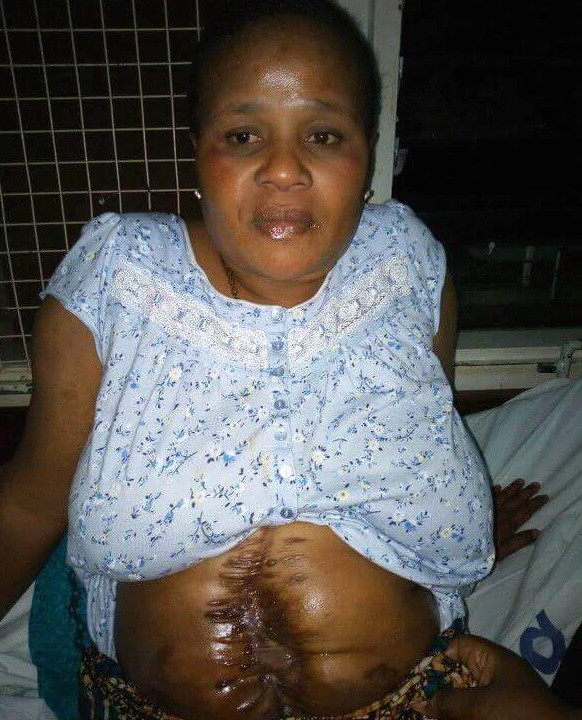 A Nigerian man posted a photo of his wife, Ndi Beatrice on a Facebook group seeking for prayers on her behalf as she is set to be operated on the stomach for the 22nd time.

“PLEASE AM BEGGING FOR PRAYER ON BEHALF OF MY CHIEF IN THE HOSPITAL, SHE HAS BEEN OPERATED 21 times,and now the pains is so serious again in the stomach,intestinal obstruction, the doctors are planning to operate her again for number 22 times,please let pray let the will of God be done” he wrote. 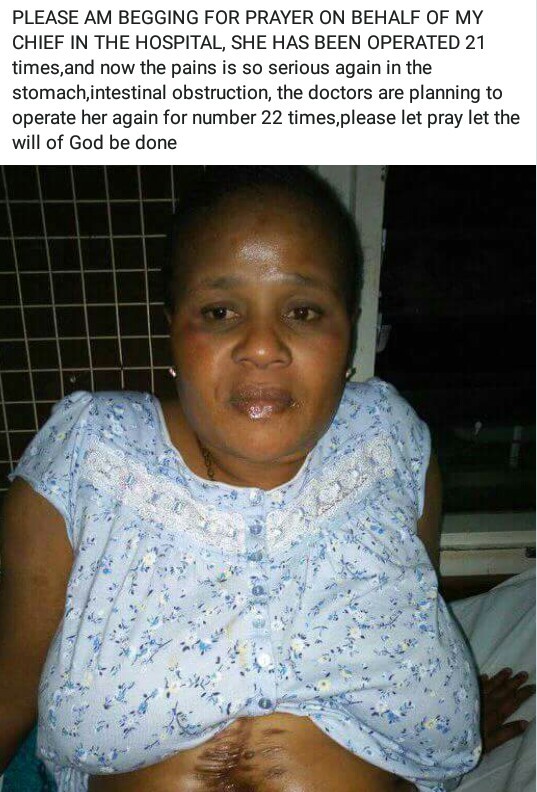 Reacting to the post, Facebook user, Sylvester Nwodo said the woman’s case is one of the reasons we should be grateful to God for good health instead of being angry with him for set backs in life. Read below:

“Most a times, people found it very hard to praise and honour GOD, some are angry with God for their poor nature and set backs in life, and so to worship God is quite unnecessary, they stop going to Church, stop attending Godly programes…yes they do all this believing they are showing God their anger, failed to realize how much GOD have been kind and good to them, that if he GOD allows demons to have their ways, they cannot see the next hour….You fall sick that can lead to your death,,,,,JESUS DID NOT COME TO DIE SO YOU CAN BECOME A MILLIONAIRE …,,,BUT FOR YOU TO BE FREE FROM DISEASES, DEMONIC ATTACKS AND FREE FROM GOING TO HELL…..TAKE A LOOK AT THIS WOMAN, What do you think that is going on in her mind now, her wealth or her health? A woman is soliciting for prayers as she’s set to be operated on again in the stomach due to intestinal obstruction. Facebook user Ndi Beatrice who shared the woman’s plight online – revealed that doctors have operated on the patient 21 times and are planning to operate the 22nd time ‎after failing to treat the problem. Ndi Beatrice who thinks the problem has developed from physical to spiritual, wrote; PLEASE AM BEGGING FOR PRAYER ON BEHALF OF MY CHIEF IN THE HOSPITAL, SHE HAS BEEN OPERATED 21 times,and now the pains is so serious again in the stomach,intestinal obstruction, the doctors are planning to operate her again for number 22 times,please let pray let the will of God be done… 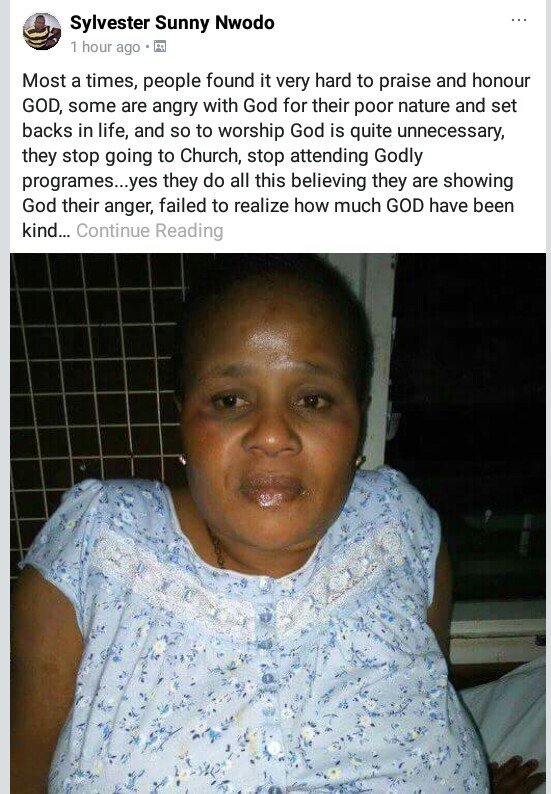 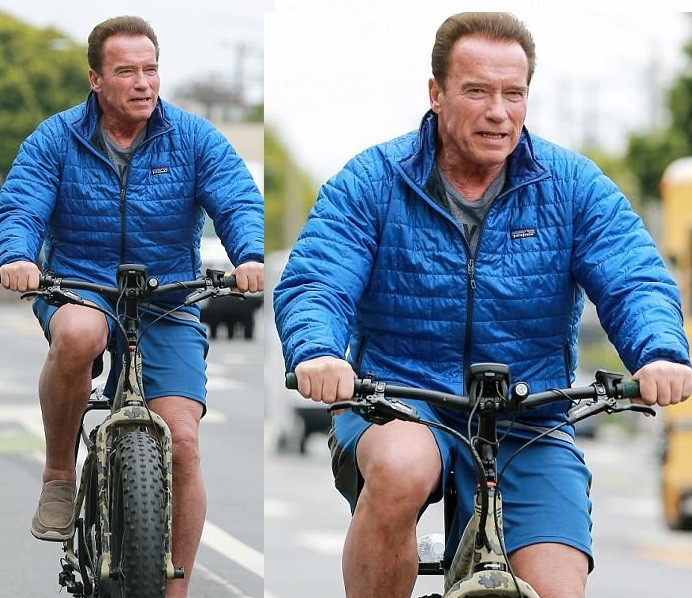 Legendary actor and politician, Arnold Schwarzenegger, was pictured in good spirit as he went for a bike ride two-months after his successful open-heart surgery.

The 70-year-old action star and former California Governor was spotted engaging in a sporting activity for the first time in Los Angeles on Thursday. 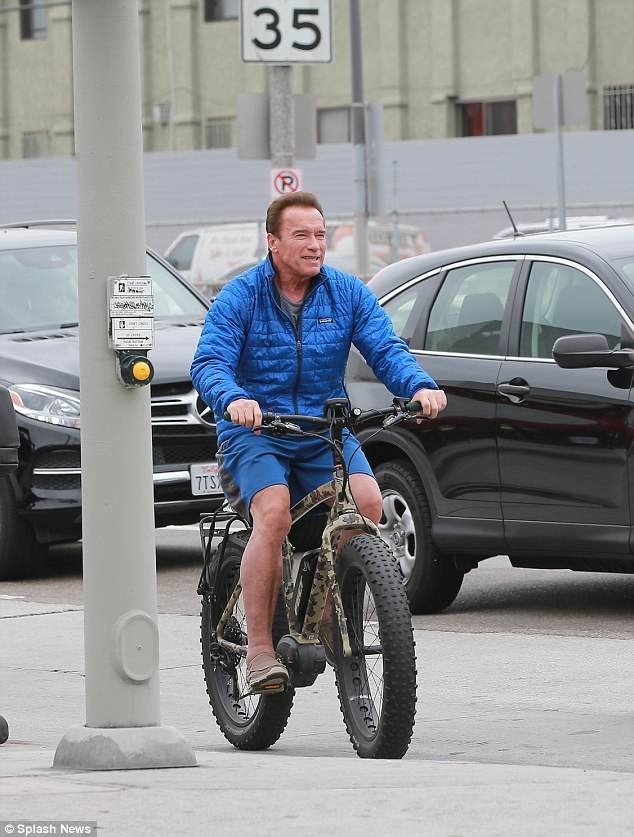 Arnold who rocked outerwear with tiny blue shorts and brown slip-on shoes smiled during the afternoon bike ride. He was also joined by a male pal.

This comes less than two months after he underwent a life-saving heart surgery at Cedars-Sinai in Los Angeles, to replace his pulmonic valve. 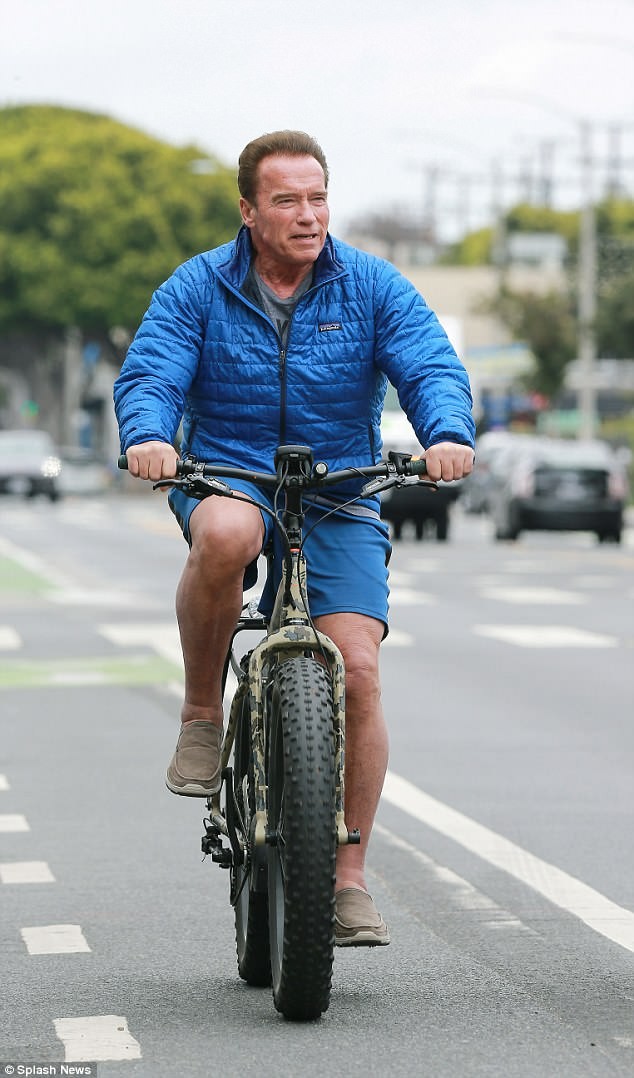 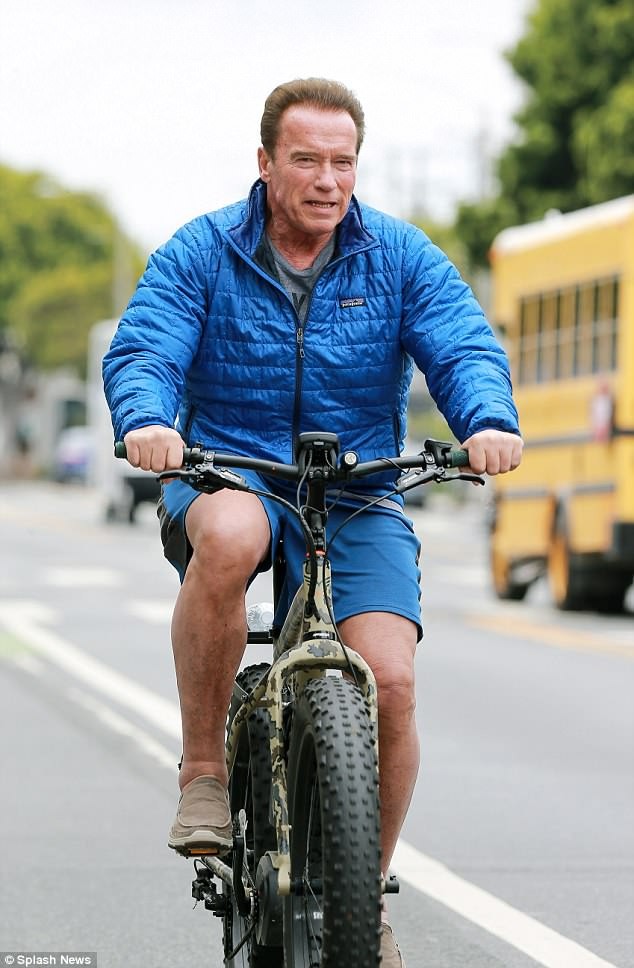 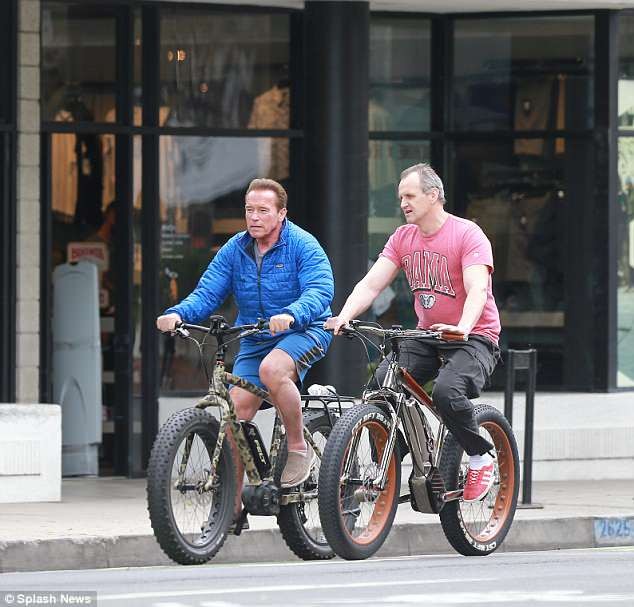 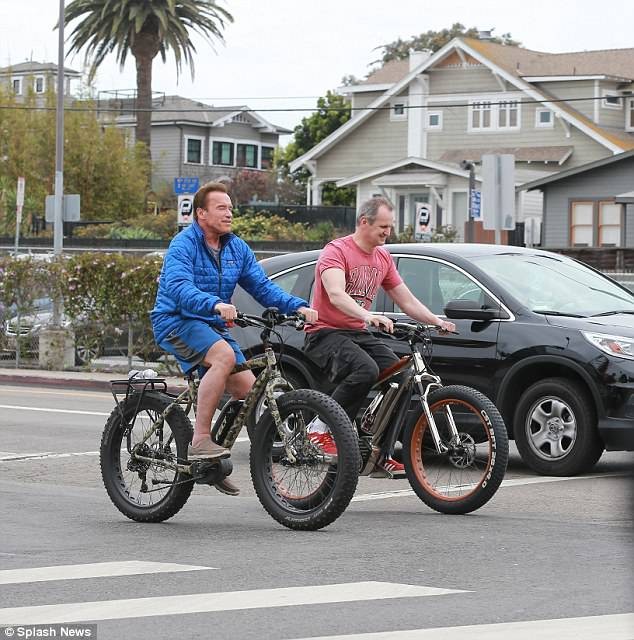 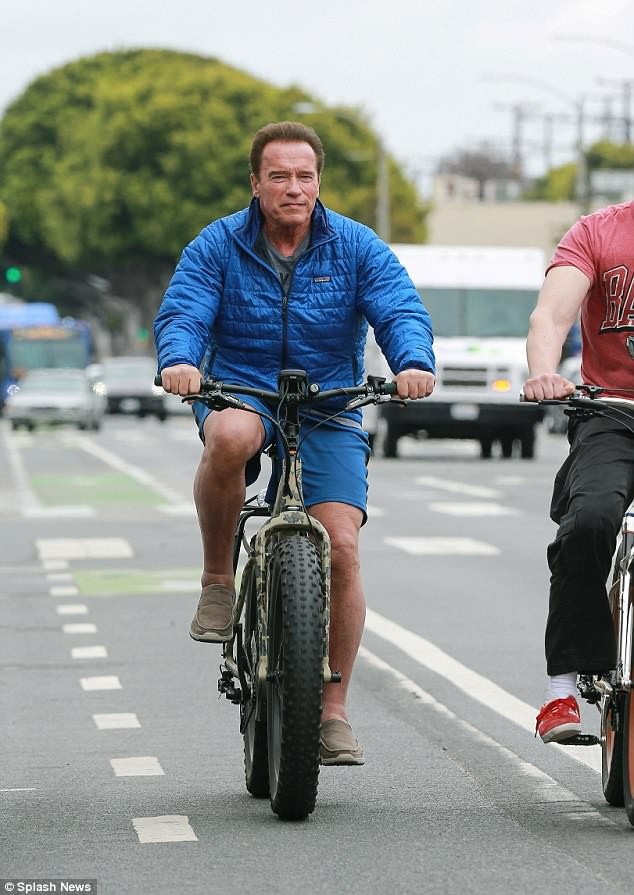 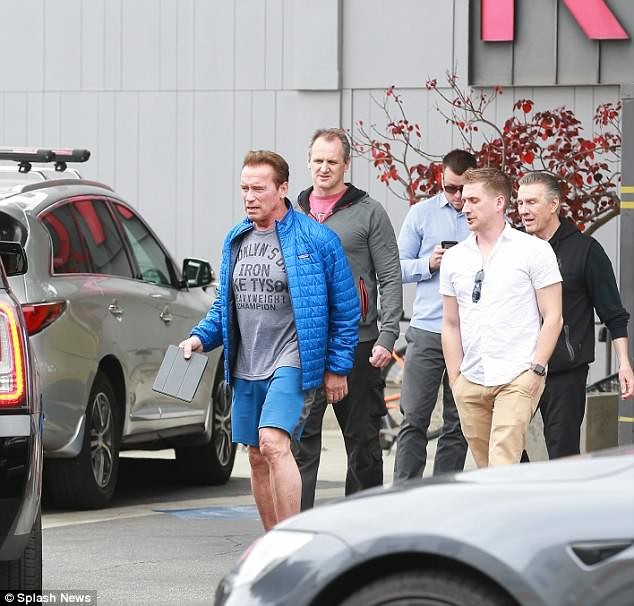 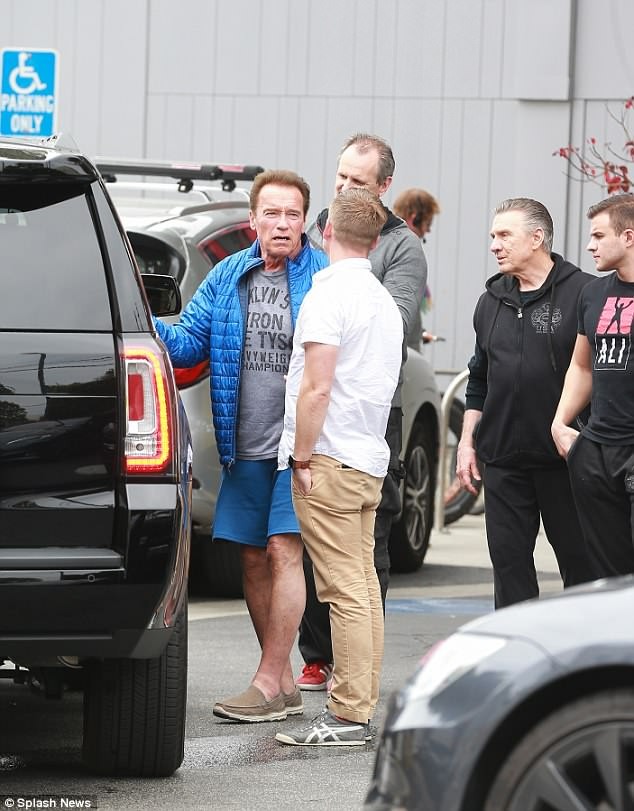 President Donald Trump’s top advisers have arrived in Beijing for two days of talks on how to avoid a trade war between the world’s two biggest economies.

The United States and China have threatened recently to impose tariffs on tens of billions of dollars of each other’s goods, and both sides are hoping enough progress will be made in the negotiations to dial down the tension.

The US delegation, which includes Treasury Secretary Steven Mnuchin and US Trade Representative Robert Lighthizer, will meet Chinese officials at a state guesthouse in Beijing and plan to depart the Chinese capital on Friday evening, a spokesperson for the US Embassy said Thursday.

“Our great financial team is in China trying to negotiate a level playing field on trade!” Trump said in a late night tweet on Wednesday.

Announcing the visit last week, Trump said he thought there was “a very good chance” of getting a deal with China.

According to Camunez, the US administration isn’t projecting a coherent stance with a team of negotiators that includes trade hawks like Lighthizer and free trade advocates like Larry Kudlow, Trump’s top economic adviser.

“There is no clear strategy that can be discerned,” Camunez said.

The Chinese government has also tried to reduce expectations.

Given the size and complexity of the trade relationship, “it’s not realistic to expect to have all issues resolved through one consultation,” Chinese Foreign Ministry spokeswoman Hua Chunying said Wednesday.

While the strategy may not be obvious, and expectations may be low, the US delegation will be looking to make progress in three key areas:

The Trump administration wants China to buy more US exports in the hope of cutting America’s $375 billion deficit in goods with its biggest trading partner. It’s also pressing Beijing to move away from an industrial policy that critics say subsidizes Chinese companies on the global stage and pressures foreign rivals to hand over key technologies.

But the best the United States can hope for this week is a “short-term bargain,” said Derek Scissors, a resident scholar at the American Enterprise Institute, a Washington-based think tank.

That might include China giving more details about its plans to open up its auto sector and pledging to increase imports from the United States. Scissors said a “credible promise” from Beijing to buy an additional $50 billion of US goods each year would be considered a win by Trump’s trade team, but he doesn’t think that’s likely to happen.

China is likely to find it hard to ramp up imports of American-made goods, experts say.

Rather than buying more American goods in substantial amounts, China is more likely to offer the possibility of greater access for foreign companies to its huge markets, Loong said.

But experts say China’s promises of greater access often turn out to be difficult for foreign companies to take advantage of because of delays or onerous requirements they need to meet.

Beijing “happily offers good intent,” Loong said. “But what it has always been reluctant to offer is specifics.”

Late last year, the government said it would allow foreign companies to control Chinese banks and investment firms for the first time, in theory making it easier for Wall Street to do business in the country.

Lyndon Chao, a managing director at the Asia Securities Industry & Financial Markets Association, said many foreign investment firms may struggle to qualify because of the amount of assets they’re required to hold.

Still, one European bank has already moved quickly to seize the opportunity. Swiss bank UBS (UBS)said Thursday it has applied to increase its stake in its Chinese securities venture to 51%.

American companies that already operate in China want the Trump administration to pressure Beijing to do more to stop theft of their intellectual property, counterfeiting and forced transfers of technology to Chinese firms, according to Jacob Parker, vice president of lobby group the US-China Business Council.

The issue has become a particular point of contention as China works to shift its economy from low-end manufacturing toward more high-tech industries.

Related: How China gets what it wants from American companies

Trump and his senior economic advisers have spoken out about the issues, citing them as a key reason for imposing tariffs. But Parker says business leaders worry that the administration’s obsession with the trade deficit, which many economists say is misplaced, reduces the likelihood of improving conditions for American companies.

“We’d like to see the Trump administration clearly articulate what it wants China to do,” he said.