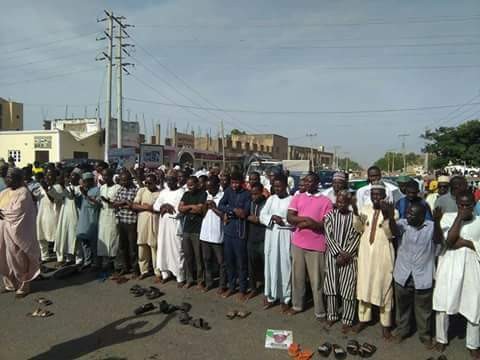 Scores of supporters gathered in front of the Federal High court, Kano on Thursday, to offer a special prayer against the EFCC and President Buhari because former Governor of Kano and Education Minister, Malam Ibrahim Shekarau was arraigned over N950m campaign fund.

Shekarau, Ambassador Aminu Wali and Engineer Mansur Ahmed were arraigned before Justice Zainab B. Abubakar on a six-count charge bothering on money laundering to the tune of N950m.

When the charges were read to the three accused persons, they pleaded not guilty. Their counsel, Mr Sam T. Ologunorisa, said:

Counsel to the EFCC, Mr Jonson Ojogbane, did not object to the bail application, but urged the court to grant the bail on certain terms and conditions.

Justice Abubakar granted bail to Shekarau, Wali and Ahmed on the sum of N100m each with two reliable sureties in the like sum.

She said one of the sureties must possess a landed property within the jurisdiction of the court while the other must be a director in either state or federal civil service. She said the accused and the sureties must deposit their travelling passports at the office of the deputy registrar of the court.
Zainab adjourned the case till June 26 for continuation.

According to Daily Trust, Shekarau and Wali’s supporters were injured when armed policemen deployed to the court fired live ammunition and tear-gas canisters to disperse them.

The police action caused pandemonium among the dignitaries, journalists and lawyers that attended the session.

Hundreds of supporters of the two politicians, who converged outside the court, insisted on reaching the main gate, but the police started firing tear-gas and live ammunitions into the air to disperse them.

Shekarau, Wali and Ahmed were later whisked away by operatives of the EFCC.