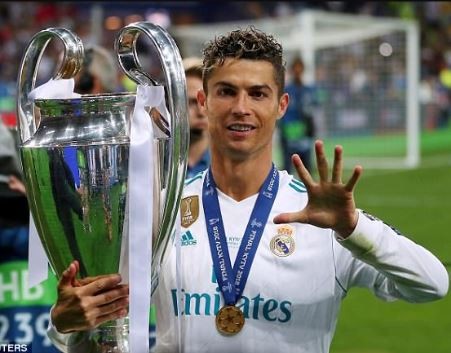 Cristiano Ronaldo has dropped a huge hint that he could be on his way out of Real Madrid right after he won his third consecutive Champions League title and 13th overall on Saturday night after beating Liverpool 3-1 in Kiev.

Speaking following the final whistle in Ukraine, Ronaldo said: ‘In the coming days there will be answer about my future. It has been very nice playing for Real Madrid. In the next few days I will give an answer. Now we have to enjoy the moment. The future of any player is not important. We have made history.’

Ronaldo later rued his actions, saying: ‘Perhaps I should not have said what I said. Now I prefer to wait and enjoy the victory. In a few days I will talk about my future. I did not want to take away merit for what has been done. It is something extraordinary. It’s a unique moment and you have to enjoy it.’

The former Manchester United forward moved to the Bernabeu after joining in 2009 and has enjoyed a stellar career at Madrid, where he has become arguably the greatest player in the world.  The 33-year-old has been linked with a move away from Spain on a number of occasions in the past but has always stayed put.