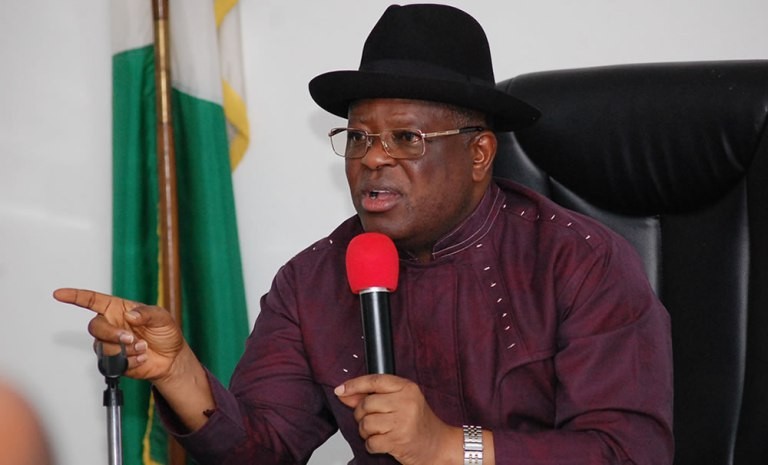 In a bid to stem the rising tide of violence in Ebonyi state, the governor, David Umahi has vowed to sign his ‘first death warrant’ once the kidnappers of a recently abducted but freed victim were convicted. Mr Monday Okeh, a businessman and proprietor of Monablis hotel was kidnapped in front of his establishment two weeks ago in the state capital, Abakaliki. He was taken to a river where he was reportedly shot and thrown into the river. He, however, survived the incident.

According to Premium Times, a family source said the assailants used a black Highlander Jeep with no bumper in the front. The source said:

“It was Neighbourhood Security Watch members that saw the jeep the way it was parked and suspected the jeep because the four doors were open.

“Three ATM cards, jollof rice and footwear were found in the jeep. It was the Neighbourhood Watch members that called policemen who later came to the scene.”

The victim was rescued and rushed to the hospital where doctors were able to stabilise his condition after extracting bullets from his body.

“There was a kidnap and robbery incident that happened in the state and it was carried out by a set of hoodlums assigned to this state by their gang. They have been doing it and escaping but today, both their ring leader and four others were tracked from far away Onitsha, Anambra state.

The owner of Monablis hotel was kidnapped and robbed and taken to a river, through Enugu state. He was shot and pushed into the river but miraculously he survived and came back.

“Through our intelligence network, the Neighbourhood Security Watch, police, SSS brought him back to the state and I have already dedicated my red biro. As soon as they (suspects) are convicted, that will be the first death sentence I will sign.”