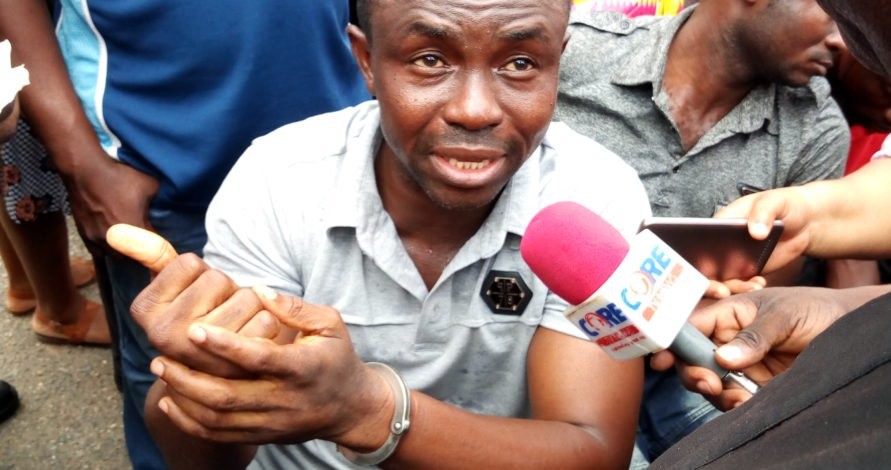 Achideume was arrested after one of the students fell ill and informed his parents that their financier had shaved his armpit and private part on May 9th after warning him and others not to tell anyone.

“We do not belong to his team. We met him during a football match and he invited us to his house. He used to talk about football to us and he used to dash us N100 or N200. He told us to be coming to his house every Monday, Wednesday and Friday. I went with my friends the first time. He asked me if I had shaved my armpit and private part before and I said no. And then, he shaved it. He was talking about football as he was doing it. Then, he said I should not tell anyone and that I should be coming to his place to collect N100.” Oluwaseun said

“The man used to give us money every Monday, Wednesday and Friday. When we come, he will tell some people to come Tuesday and Thursday. The first day he saw me, he asked my name and about three weeks later, he asked me if I was at puberty stage. I said no. He said he wanted to check it and when he checked it, he asked if I have shaved it before. I said yes I have. So, he said I should not worry. But my friends said they have not shaved before. The man shaved Oluwaseun Salaudeen’s hair six times and he shaved Damilare’s armpit twice. He told us that no one should know he usually asked such questions. We are not in his academy. His house is at Alagba Estate.” he said

When interrogated, Achidume denied the allegation.

“These kids are not even in my team. They have never been to my house. I used to throw money to them from the balcony. They used to complain that their parents do not give them money for food and that they do not buy books for them. It is untrue that I took them into my house. I play with my team on Saturdays. I do not see them during week days because I go to work. I told the mothers of these children that I have three kids and that if I did anything wrong to their children, let me lose mine before my eyes. But, if I did not, their children will die before their eyes. The women should tell their children to confess how all these came about. The children are here, do they look like people losing weight? How can someone just raise false allegation against me to ruin my life? I manage over 80 kids through my coach and no one has ever complained of such about me. They have disgraced me but the God that I serve will vindicate me. I do not know why they did this but I believe God knows best. Life is mysterious and this is a mystery only God can unravel.”