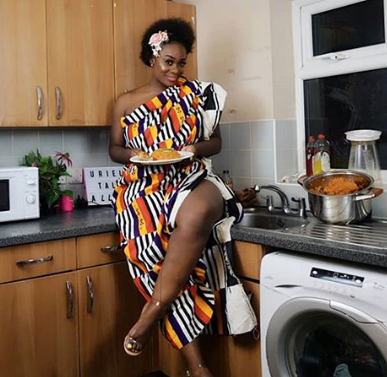 Big Brother Naija season 2 housemate Uriel Oputa has opened up about her life, depression, her mum’s health issues and why she is determined to always take care of her mum who is suffering from dementia.

In a recent interview with Women Ng, Uriel said her 64-year-old mother was widowed at 36. They lived in the UK at the time and she had 5 kids to take care of. She had a chance to return them to Nigeria so their father’s family will take care of them but she chose to keep them with her and struggled to take care of themselves by herself. This, she said, has made her determined to stand by her mum and take care of her, even if it means dedicating her life to her till she’s as old as 40 years.

“I grew up in the UK but my dad died when I was two years old, so I didn’t grow up in a household with a father. My mum was my father and is my mother.

We started to notice quite early because we’ll be watching stuffs and she’ll be asking you the same questions over again. One day, she tried to cook chicken but ended up putting the whole chicken packet with the plastic inside the microwave. If nobody came at the right time, the place would have exploded. She’ll be cooking, frying something, everywhere will be smoky and she won’t notice. She’ll come inside the house, she will leave the front door open and she won’t know. It was very scary. My mom would normally go to work and come back, but we noticed she will go to work and wouldn’t know how to find her way home and she will call us and be crying that she doesn’t know her way back that someone should come and get her that she doesn’t know where to go, she doesn’t know the right step to take, she’s lost and this is a route she has been taking for many years, and that she doesn’t even know the way to our house.

She had a stroke, so from the stroke, she developed this illness, brain damage. Her body is shutting down slowly. Like now, we’re in Nigeria; she doesn’t know where we are. She keeps asking me, are your brothers coming? Are we in London? Then she says, ‘I want to go and see my mother’ and I say, ‘mummy, your mother is dead.’ Yes, but I want to go and see her. So, everything doesn’t make sense to her sometimes.

My mum had a choice. She was 36 and a widow. She had a choice to dump us, in fact, ‘take them back to Nigeria, and let them stay with their father’s people. Let me live my life, I am 36 years old, I can get married again.’ Give us out to my father’s family but she didn’t do that. She hustled, sweated for five children.

There’s been a time when before I entered the big brother house, I was in Nigeria for many years and I actually thought about giving up this dream of being an entertainer and just dedicating my life to looking after my mum. I didn’t care if I wasn’t going to get married, I didn’t care I wasn’t going to have children, I just wanted to do that for my mum. And however long it took for her to pass away; I’ll just dedicate my life to her. Even if I’m 40 or 50 and she goes, I know that I’ve done something.

Like yesterday, she woke up twice to go to the toilet and she can’t really walk so I had to guide her, hold her and walk slowly. Sometimes, as a human being, when someone wakes you up in the morning, you’ll be angry. At 3am, she’ll wake you up. At 5 am in the morning, she’ll wake you up again that she wants to go to the toilet. She can wake you up two to three times in a night, but when I look at her face, I know it’s not her fault. If my mum has the power to get up and go, she will go. Why will she want to trouble her child?

She said she’s been advised multiple times to put her mother in an old people’s home or get a caretaker for her so Uriel can live a full life and enjoy her youth, but she refused.

I said no. As long as I’m here with my mum, I will bath her, change her and do everything. Then, if somebody will just come, maybe come and go. Like now that I’m here with you, someone is with my mum, but as far as cleaning, bathing is concerned, I do everything for her. I don’t allow anybody to touch her food, I don’t like that.

She screamed and said, ‘who are you.’ I thought she was joking but she was not. She was scared. She didn’t even allow me to come close to her. She started praying, shouting, then I realized that this is real. She does tend to forget sometimes. She’ll ask me, ‘are you my daughter and I’ll say yes.’ I had to show her pictures and that was it.

I realized that I’ve lost the mum I once knew. I realized that I’ve lost a part of my mum I could never get back. That strong woman that I knew, that woman that was fearless, agile, and prayerful. My mum can’t even pray now because the words don’t come to her head, you have to guide her through it. That woman is still my mum; I still see pieces of her but that woman have been replaced with somebody that is almost childlike, somebody that needs comfort, guidance, assistance, and care.

My brothers have lost their faith. They no longer believe in God how they used to, how we were taught growing up. They don’t really pray because they believe if God was a merciful God, if God was all those wonderful things, why would he let a woman that has given up so much of her life, even to others, suffer so much.

It’s sad but I see what they are going through and I continue to pray for my brothers, my mum and myself. I am the only girl but I’m the anchor that will keep the family together. I had to take over from where my mum left. My mum is a very prayerful woman. Losing my faith is like everything she fought for religiously didn’t mean anything.

As a result of the situation with her mother, Uriel says she sometimes goes through depression. She said she’s lost suitors because of her instability as she had to attend to her sick mum, and this has made her not to get married.

I think sometimes, it would be easier to lose your parents and for them to die than to see your mother die slowly in front of you. That one is not a good thing. It’s like torture and you’re deprived of so many things.

My depression came from having my own insecurities, not being where I wanted to be, having men promising me houses and cars but because of my faith, I always said no and I never understood why I always say no. That thing where, this is not how you were raised was so strong and I couldn’t part away from it. I was just frustrated. I became depressed.

My mum was a widow at 36 with five children. So, imagine seeing my mum work hard, nobody ever gave my mum anything. My mum has been a widow since she was 36 and I’ve not seen any man enter my house, I’ve not seen any man say, Blessing, let me give you money for your children. So that is how I grew up. I grew up seeing a strong woman. I grew up seeing a woman hustle. That’s all I know. I don’t know about a man giving me something. All I know is if you want something, work hard for it. I don’t know about opening my legs to somebody for a range rover. Yes, it’s easy but that is not the lifestyle I know.