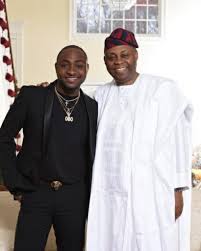 Popular musician Davido has achieved quite a lot in his music career. He has won countless awards as well as performed at a lot of countries all over the world. Most recently, his songs If and Fall went diamond and platinum respectively. According to the Recording Industry Association of America (RIAA), this means If has been sold or streamed one million times and Fall has reached ten million record sales worldwide.

He took the commemorative plaques he got to his father in the United States of America. With his second daughter Hailey in tow, he thanked his father for his support as he presented the plaques to him.

Writing via his Instagram page, Davido thanked everyone who supported him when he was initially given the plaques at the beginning of the year. “IF is officially Diamond and ‘FALL’ is officially Platinum in sales!!! My trophies finally came in as well! GOD IS REAL! Thank you Guys for making this happen!! Just getting started!!! Bless to my team.