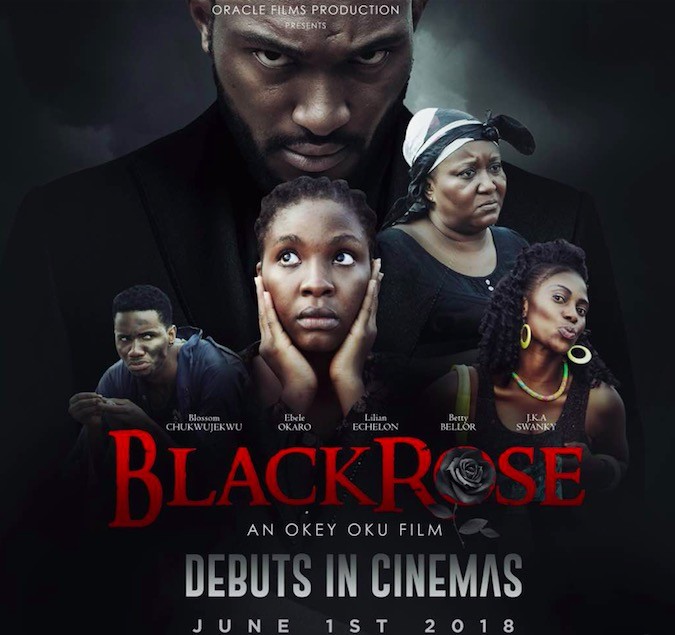 Award winning movie; BLACKROSE, hit cinemas nationwide.
Following a sold-out premiere of the movie on the 29th of April 2018, at THE BASE Enugu with lots of Nollywood stars and top guns in attendance.
The Oracle Films movie debuted in cinemas nationwide the 1st of JUNE and has since recorded massive viewership…as well as several award nominations too.
The Okey Oku’s blockbuster which is currently the “most sought after” movie, is already showing in cinemas near you.
Educating, thrilling and entertaining…BLACKROSE is a one of kind movie.
***
Synopsis:
Rose has a firm understanding of the virtuous woman as imparted by her mother, not so practiced by her sister. Her desire for a better life without selling her dignity seems to be in the person of Desmond, a man she fell in love with at first sight regardless of their differences. He introduces her to everything he knows rather untimely and before she can stop herself, she is wrapped in his world, a place she would rather not be.
Cast:
Blossom Chukwujekwu
Ebele Okaro
Lilian Echelon
Betty Belor
JKA Swanky
Written by:
BethRogers
Director of Photography
Okechukwu Oku
Produced and Directed by:
Okechukwu Oku
***
CINEMA SHOWTIMES:
1. CARTEGE Cinema, Asaba || 11:30am, 4:20pm, 6:40pm and 9pm Daily
2. MEES PALACE Cinema, Jos || 3pm and 7:40pm Daily
3. PEPPERONI Cinemas, Port Harcourt || 1:45pm and 3:45pm Daily
4. EXHALE Cinemas, Yenagoa || 1:22pm and 5:20pm
5. THE BASE, Enugu || 10th June – 6pm
6. CITADEL Cinemas, Uromi || 2pm, 4pm and 8:20pm
7. Clementine Cinemas, Lekki Lagos || 5th June