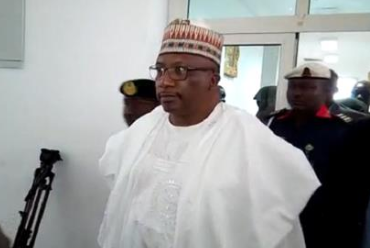 The Minister of Interior, Rtd. Lt.Gen Abdulrahman Bello Dambazau has disclosed that 182 out of the 210 prisoners in the Minna Medium Security Prison are still at large.

The Minister disclosed this after an on-the-spot assessment of the prison this morning. There was a jailbreak at the prison last night.

“Among the escapees were two condemned criminals who were supposed to have being executed today. That is probably part of the motivation for this prison break. However, investigation will bring out most of these” he said

Also speaking during the Minister’s visit, the Comptroller General of Nigeria Prison Service, Alhaji Ja’afaru Ahmed doused fears that there were Boko Haram inmates which is the reason why the prison was attacked.

”There is no Boko Haram suspect in Minna Prison facility. We do not know who attacked the prison yet but investigations will reveal it. ” he said