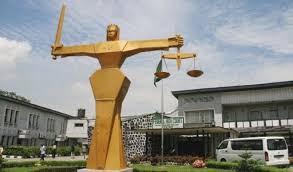 A 21-year-old lady, Gift Mike, was today arraigned before an Ebute Meta Chief Magistrate’s Court for allegedly killing her 48-year-old South African boyfriend, Daniel Grant. The accused, a cosmetologist, was arraigned on one count charge of murder.

According to the Prosecutor, CSP Effiong Asuquo,Gift committed the offence on May 5th at Room 201, Emerald Cove Hotel, No. 18B, Sinari Daranijo St., Victoria Island where she was lodging with the deceased. She killed him at about 1.30 a.m. on that day.

He said that the offence contravenes Section 223 of the Criminal Law of Lagos State, 2015. Section 223 prescribes a death sentence for convicts.

The Chief Magistrate, Mr A.O. Komolafe, however, admitted the accused to a bail of N100, 000 with two responsible and gainfully employed sureties each in like sum. He referred the case to the Director of Public Prosecution for legal advice and adjourned the case until July 11th.