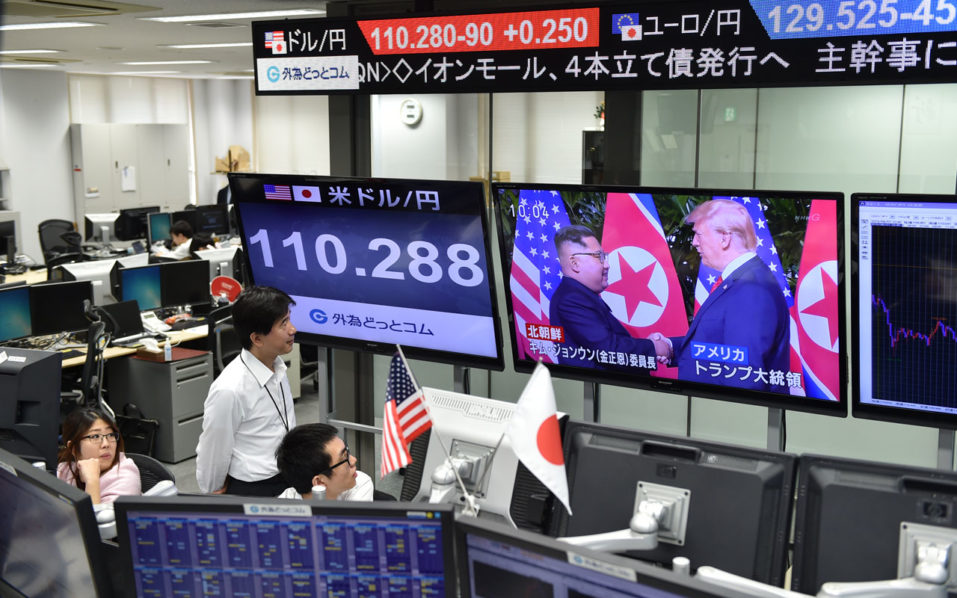 Employees of a foreign exchange trading company in Tokyo look at the screens displaying live news of meeting between North Korean leader Kim Jong Un and US President Donald Trump in Singapore, and the Japanese yen’s exchange rate against the US dollar on June 12, 2018. Donald Trump and Kim Jong Un have become on June 12 the first sitting US and North Korean leaders to meet, shake hands and negotiate to end a decades-old nuclear stand-off.

Tokyo stocks closed higher on Wednesday helped by a cheaper yen, as market focus shifted from Donald Trump and Kim Jong Un’s summit to US and European central bank meetings.

“A cheaper yen against the dollar helped boost” Japanese shares, Daiwa Securities said in a commentary.

Global markets moved little following the Trump-Kim meeting on Tuesday, with some analysts lauding the positive tone of the event, despite uncertainty about whether it would result in significant change.

Investors are now watching the conclusion of the Fed’s meeting later Wednesday and the ECB policy decision on Thursday.

Toshiba surged 6.64 percent to 337 yen after it said it was buying back 700 billion yen of it shares after completing the sale of its memory chip business.

Nintendo dropped 6.21 percent to 39,120 yen after its presentation at the E3 trade show disappointed investors by failing to mention new products.