After Actress, Lizzy Anjorin responded to Ronke Oshodi Oke’s advise to stop showing off on social media, describing her as ‘evil, wicked and an old jobless begger’.

Bobrisky fully supported her, he wrote;

@lizzyanjorin sis I’m fully in support of your words last nite. Imagine working hard all day all night and finally God answered my prayer and I bought a new car or a new house, how will I keep quite without sharing wat my God has gifted to me to other people who don’t have strong believe that same God can still bless them too. One Mumu said we should always keep quite wen we achieve new stuffs. I never liked that woman for anything because sometimes early last yr she has crossed my path. And I pray to God for her clap back let me destroy her with an everlasting insult. Some of her followers too are saying ma u are speaking the truth. Really ! Y won’t she speak the truth wen u are all in the same caliber of “BROKE” family. Trust me something new is coming for me soon I swear I will disturb the internet with it. Because I know how long I have be saving to get it. Morning guys

The World Cup group stages qualifiers round 1 ended today and Senegal got Africa’s first win with a 2-1 victory over Poland.

In reaction to the result, Nigerian rapper Illbliss took to Twitter to slam Nigerian players who he reffered to as “Super Chickens.” 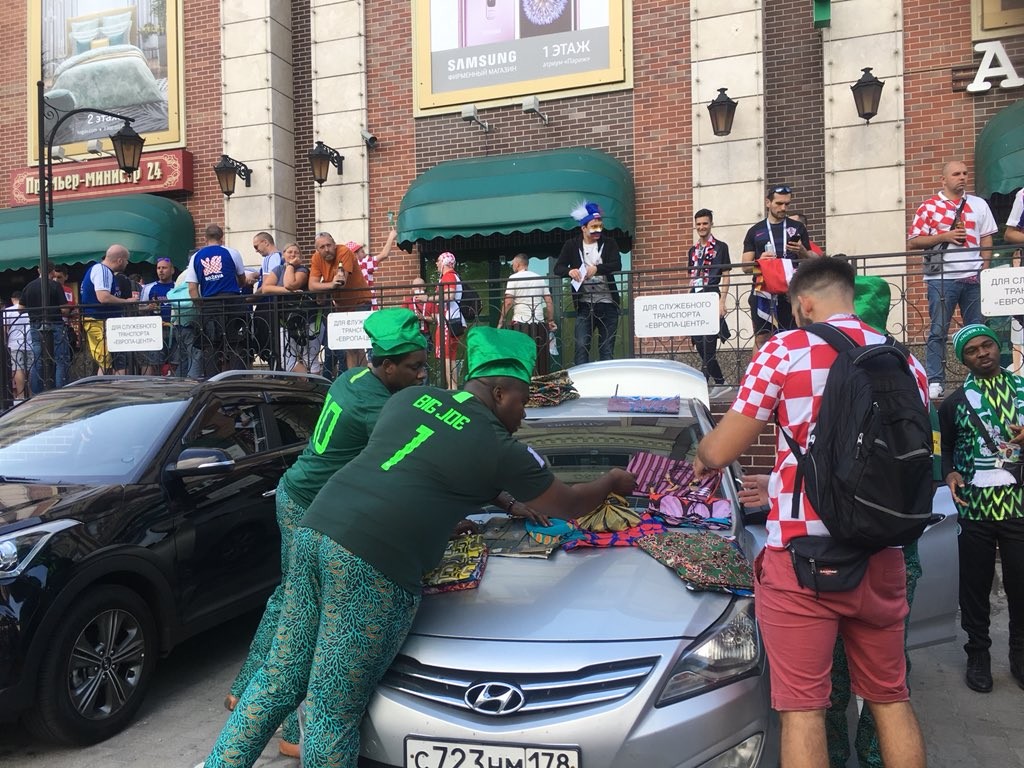 These Nigerian men in Super Eagles jersey were pictured outside the Kaliningrad Stadium selling Ankara fabric before the Croatia and Nigeria World Cup Clash last week.

The photo has gone viral. See Twitter rections below. 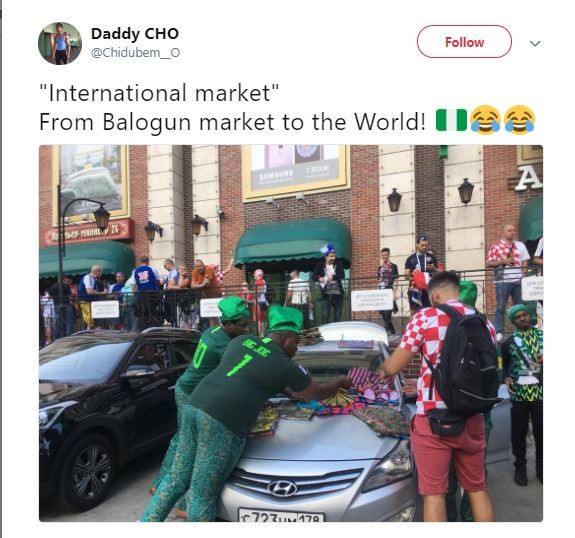 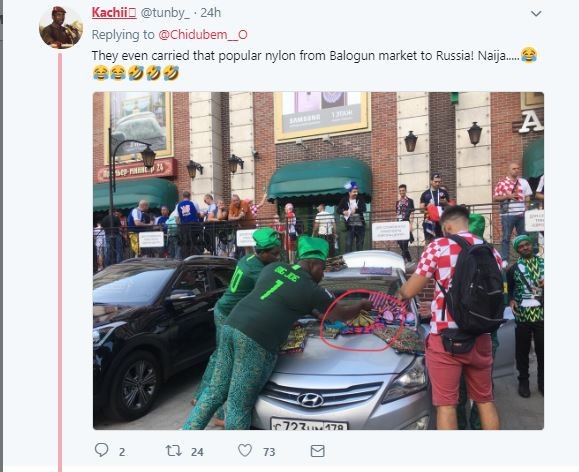 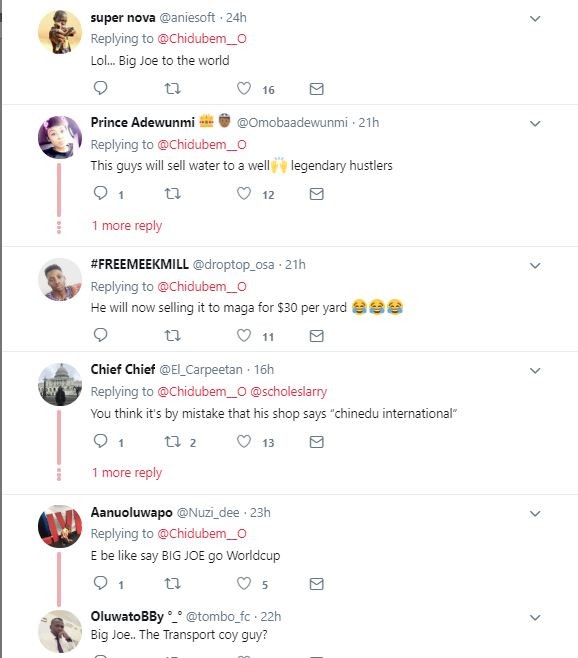 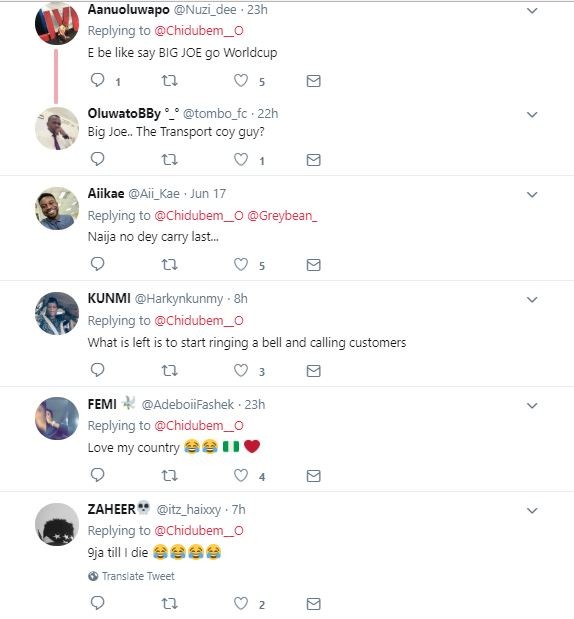 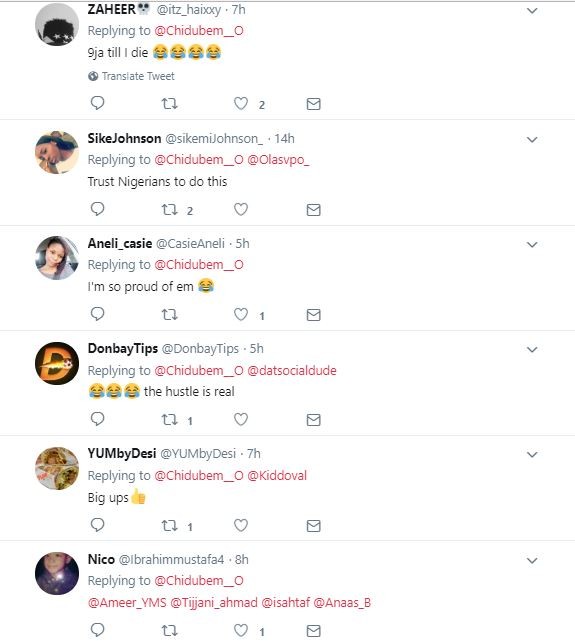 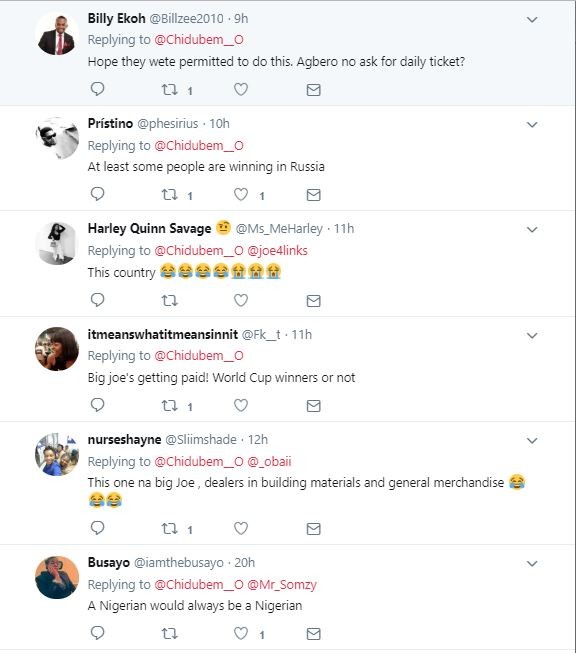 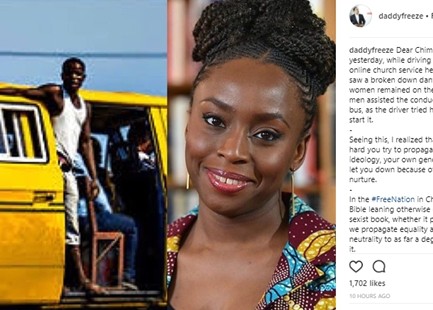 Dear Chimamanda,
yesterday, while driving home from our online church service held on the radio, I saw a broken down danfo bus. All the women remained on the bus, while the men assisted the conductor in pushing the bus, as the driver tried his best to jump-start it.
–
Seeing this, I realized that no matter how hard you try to propagate your feminist ideology, your own gender will continue to let you down because of both nature and nurture.
–
In the #FreeNation in Christ, despite the Bible leaning otherwise (the Bible is a sexist book, whether it pleases you or not), we propagate equality and gender neutrality to as far a degree as logic allows it.
–
However, it takes wisdom to know the extent to which we can tamper with the innate characteristics of both genders, without stirring up unwanted consequences.
–
The other day you spoke of chivalry in a cute way, although your understanding of the word seemed questionable, your motives were nonetheless benign. Howbeit, the shortcomings of your ideologies were highlighted by Dana Loesch, an American activist who reminded you that the issue of genital mutilation, where Nigeria occupies a top rank, should be a greater priority for you and by me after the Danfo bus incident I witnessed yesterday, which led me to the deduce that women have the congenital contention that men must bear the greater weight of a physical burden.
–
Another situation I implore you to delve into, is the fact that women occupy a pivotal role in religious brainwashing, as most of the false churches and charlatan GOs use them as a ‘point of contact’ to enslave their husbands and children, lending credence to Willie Lynch’s letter, ‘The making of a Slave’ where he stated: “special attention must be placed on females” and “CONCENTRATE ON THE FUTURE GENERATION. Therefore, if you break the female mother, she will break the offspring in the early years of development!” ~FRZ 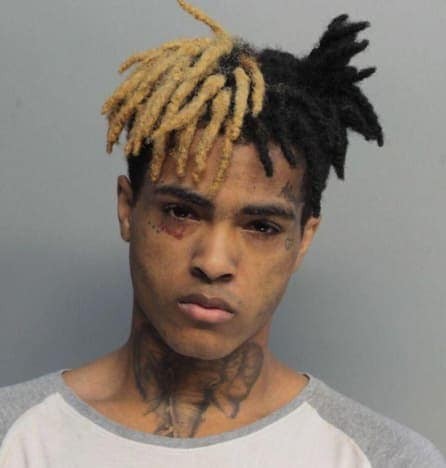 Popular rapper Xxxtentacion (born Jahseh Dwayne Onfroy) has been killed. He was shot and killed today June 18th in his sports car in Miami. According to police, the 20 year old was ambushed by two men in a Black SUV, while he was leaving a motorcyle dealership. The men pulled out guns and shot him dead.

Another story is that he was leaving the dealership when a ‘gunman driving a black Dodge Journey ran up to his vehicle and shot him.’ Multiple gun shots were heard.

Emergency dispatch radio described two black males wearing hoodies, and the shooter was wearing a red mask in the incident which they have classified as a drive-by shooting.

The car used in the shooting has been confirmed as a black Dodge Journey, with dark tint and black wheels.

XXXTentacion who was a promising talent was awaiting trial for domestic violence against his pregnant girlfriend. He was also facing more than a dozen felony charges and has been on house arrest until recently after the judge let him out so he could tour.

Xxxtentacion was filmed lying motionless behind the wheel of his car. He was later rushed to a local hospital, where he was pronounced dead.

See the TMZ video below…