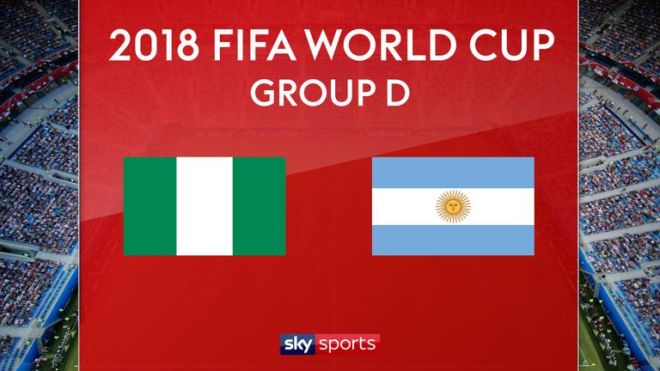 Nigeria and Argentina will be battling it out for a last-16 spot at the World Cup, and Jorge Sampaoli’s side could make some unwanted history.

Argentina are currently enduring their longest winless run in World Cup finals history (D2 L2) and have never previously gone through a first-round World Cup group stage without at least one victory before.

The last time Argentina failed to progress past the group stages of the World Cup was in 2002 – with their sole victory that year coming against Nigeria – but coach Sampaoli has urged to his side to give their best performance on Tuesday.

“We have to make our goal five games to reach the final. Tomorrow will be the first final,” he said. “No matter who plays tomorrow will have the obligation to give until the last bead of sweat so that Argentina will go through.

“We don’t have any alternative and I am sure this is how it will go. Tomorrow, I am sure that they will see the best version of Argentina at this World Cup.”

If Argentina beat Nigeria in their final game and Croatia beat Iceland, Argentina go through. They will also go through if they beat Nigeria, Iceland beat Croatia, and Argentina’s goal difference betters Iceland.

But Nigeria can qualify with a draw or win against Argentina if Iceland lose or draw against Croatia, and coach Gernot Rohr was ruthless when asked about ending Lionel Messi’s World Cup campaign, which could potentially be his last.

“We love this great player, Messi, everybody loves him,” he said. “The question is not if it is the last World Cup for him or not, the question is for us to be qualified.

“We are not here to watch him play. We are here to make a result, we are professionals. We are here to defend the colours of Nigeria and we know in football there is no mercy, no pity, everybody wants to win and we cannot make any gifts even if we like very much this player.”

Willy Caballero is set to be dropped by Sampaoli after his mistakes against Croatia, with River Plate goalkeeper Franco Armani – who is uncapped by Argentina – expected to take his place.

Angel Di Maria and Ever Banega could be recalled to the starting XI, while Gonzalo Higuain and Paolo Dybala are also available.

Nigeria captain John Obi Mikel is set to play with his left hand in a cast after sustaining a fracture against Iceland, although will need to get the all-clear from match officials to wear the protective material.

Four of the eight games between Nigeria and Argentina have come at World Cup finals – Argentina winning all four contests.

Nigeria’s most recent encounter with Argentina came in November 2017, with the Super Eagles winning 4-2 in Krasnodar, thanks in part to a brace from Alex Iwobi.

All six of Nigeria’s wins at the World Cup have come against European opposition, with the Super Eagles drawing two and losing five against nations from other continents.

Nigeria are looking to win successive World Cup games for the first time since 1998 – three points will also guarantee a place in the knockout stages for the fourth time.

Messi has had 12 shots in this World Cup so far but has yet to score – that’s eight more attempts than any other Argentina player.

In terms of performance, it can’t get any worse for Argentina. I actually thought that when Jorge Sampaoli got the job he would sort out the structure of the team and build it in a fashion that made Lionel Messi return. Messi has returned but they just don’t have any answers. They don’t know what to do, they have no DNA and they have absolutely no fluency.

What I cannot believe is that he cannot get Sergio Aguero, Gonzalo Higuain and Paulo Dybala into the team with the way Messi plays. For me, it’s staring him in the face, just play them all together and go for it. The defence isn’t great, we know that, but he has to take the biggest risk of all time now. I see this game being a bit like Germany’s against Sweden. Pressure will come on Argentina but this time we’ll see an answer from Messi. On the other hand, it’s a stunning opportunity for Nigeria and they will make life difficult for Messi and co.