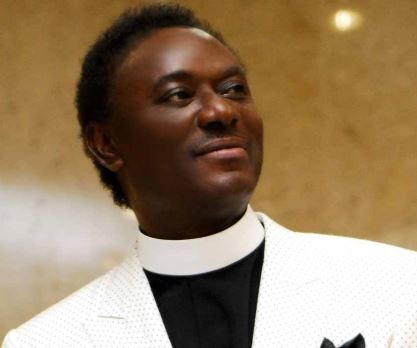 Household of God Pastor, Chris Okotie has called on two of Nigeria’s leading political parties APC and PDP to adopt him as their presidential candidate.

According to a report by TheNation, the man of God spoke at a press conference in his church during the Sunday service today saying the dreams and aspirations of the people having been confined to oblivion and he believes that we must act now to defend the Nigerian dream as things have gone to a worse state.

He said that he has decided to return to politics seeing that Nigeria needs a credible personality one who is intellectually ready and capable. He added that the Nigerian constitution is obsolete and therefore desires to pursue a mandate that will set up a new government of reconciliation.

“In sincere consideration I humbly and sincerely ask that the APC adopt me as the presidential candidate. I have extended the same gesture to the APC too. This is the time to demonstrate our love for this country.”  Pastor Chris Okotie said that this is not out of his will but that of the Lord.

Pastor Chris Okotie first came into politics in 2003 under the Justice Party(JP) where he contested for the position of the President but lost to Olusegun Obansanjo. He again vied for the same position in 2007 under the party he founded, Fresh Democratic Party (FRESH), but lost to Umaru Yar’Adua. Pastor Chris Okotie, not deterred again ran for the presidential seat in 2011 and lost to Goodluck Jonathan.