The injury prone defender made 14 league appearances for 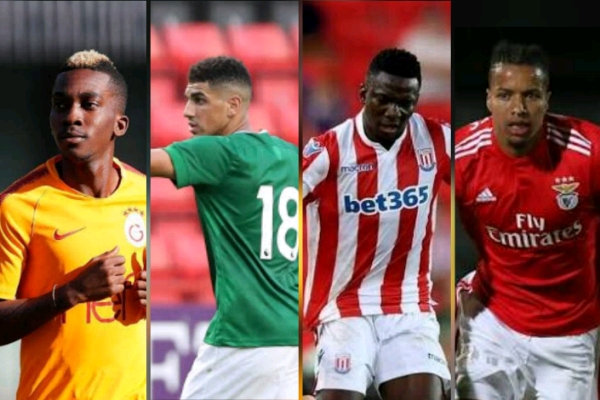 Mainz last season, and now faces a difficult task in earning a starting berth at his new club.

He will battle Lewis Dunk and Shane Duffy for a starting berth in the team.

Henry Onyekuru joined English Premier League club, Everton from Belgian outfit, Eupen last season but he is yet to kick a ball for the club.

The young forward spent last season on loan at Anderlecht where he scored nine goals in 19 league appearances for the club.

His season was however cut short following a knee injury he picked in a league game last December.
He now has a chance to get started again with Galatasaray where he will spend the 2018/2019 campaign on loan.

The midfielder spent the second half of last season on loan at UD Las Palmas of Spain.

He was one of the top performers for Nigeria at the 2018 FIFA World Cup in Russia.

Tyronne Ebuehi rose from the academy to earn a starting spot at Dutch side, ADO Den Haag. He also gained international recognition with Nigeria following his impressive showing for the modest club.

Portuguese giants, Benfica beat other top European teams to his signature in May.

This is no doubt a big career move for the young defender who now has the chance to prove his showing for ADO Den Haag was no fluke.

The forward made a name for himself as a youth international and is expected to break into the main Super Eagles team in future.

There were reports that he is highly rated by Liverpool who gave him a new contract last week but he will spend the season on loan at Belgian club, KAA Gent.

The defender few weeks ago swapped Amkar Perm for another Russian team Lokomotiv Moscow. With the chance to feature in the Champions League, the Nigerian now have a bigger platform to showcase his talent and further cement a place in the Super Eagles after making the squad to the 2018 FIFA World Cup in Russia.

After an impressive showing for Austria Wien in the Austrian Bundesliga, Kayode Olanrewaju made a big move to English Premier League champions, Manchester City.

He was immediately loaned out to Spanish club, Sporting Girona where he struggled to earn a starting spot.

The loan was ended prematurely in January and he later moved to Ukrainian club, Shakhtar Donetsk where he bagged three goals and one assist in eight appearances.
The move was later made permanent after he penned a five-year contract.