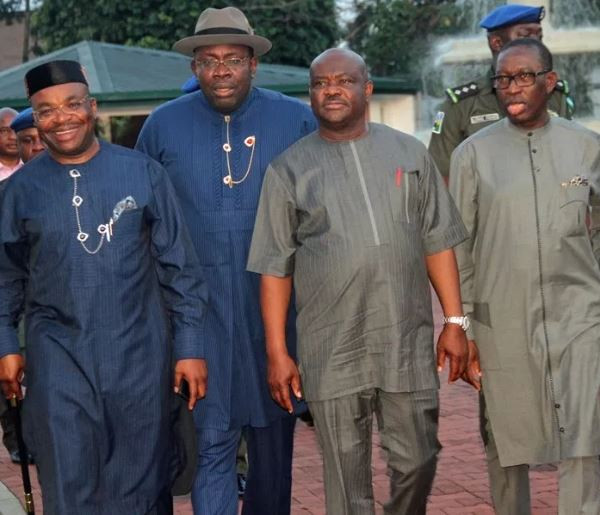 Five out of six governors of Nigeria’s South-South have come in defence of Chief Justice Walter Onnoghen at an emergency meeting in Abuja on Sunday and said the move to prosecute the top jurist for alleged asset declaration infractions was vindictive and persecutory, and should be condemned by lovers of democracy.

The governors consequently prevailed on Onnoghen not to appear when the trial opens at the tribunal on Monday morning.

The governors at the meeting were Seriake Dickson of Bayelsa, who chaired it at his guest house in Maitama, Abuja, Nyesom Wike of Rivers, Ben Ayade of Cross River and Udom Emmanuel of Akwa Ibom.

The meeting began at about 4:00 p.m. and ended with a communique shortly after 7:30 p.m. The governors declined to take questions from reporters despite earlier promise in the announcement that there would be a press briefing after the closed-door meeting.

Governor Ifeanyi Okowa and Governor Godwin Obaseki of Edo State were both absent at the meeting. The governors are the latest to express outrage about the scheduled trial of the Cross River-born Mr Onnoghen, following a petition filed to the Code of Conduct Bureau by a civic group led by a man with previous ties to President Muhammadu Buhari.