A Republican lawmaker said during a TV interview that he would drown his own children if they came to him and told him they were gay.

Eric Porterfield, a West Virginia lawmaker and Baptist preacher, appeared on WVVA TV, an NBC affiliate, to discuss his recent inflammatory comments about the LGBTQ community.

During the interview, the GOP lawmaker was asked what he would do if his young children came to him one day and told him that they were gay.

Well, I would dress my daughter first, as I would take her for a pedicure, I’d take her to get her nails done, and see if she could swim.

If it was my son, I would probably take him hunting, I would take him fishing, then I’d see if he could swim.

The reporter caught Porterfield’s apparent threat to drown his own children and she asked him to clarify his statement.

I just want to make sure they could swim.That’s it. I’d take them out to do activities.

Following his alarming comment, Porterfield has been called out by a number of people.

He was still smiling, as if threatening to kill his own children were cute.

Porterfield has previously made other homophobic remarks, such as arguing that people should have the freedom to fire or deny someone housing based on their sexual orientation. He also claimed that LGBT people are terrorists and likened the LGBTQ community to the Ku Klux Klan.

West Virginia has no room for someone who expresses such hate. Let alone room for him to hold a public office where he is supposed to represent the people of West Virginia.

His hate-filled remarks and actions speak volumes and so does the Republican Party’s silence. The Republican majority’s leadership needs to condemn these actions. Their silence is complicit and the people of West Virginia deserve better. 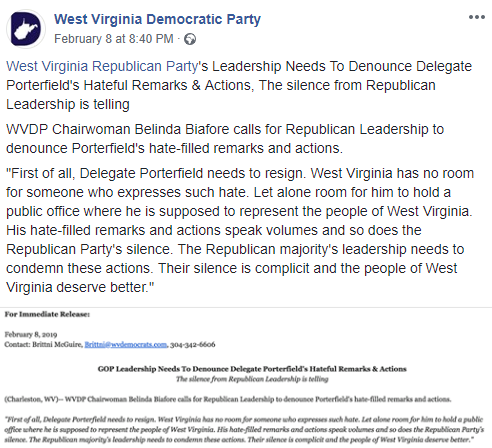