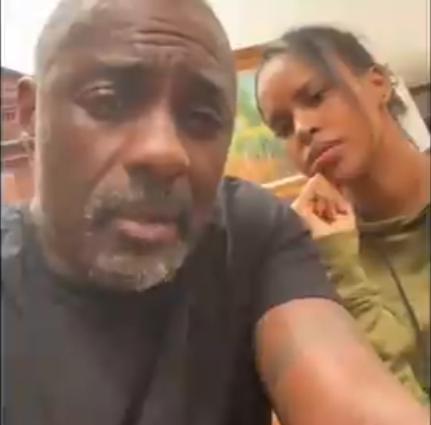 Idris Elba announced that he tested positive for coronavirus and during his announcement, his wife, Sabrina was beside him. This led to a backlash and the actor has now responded.

Sabrina sat next to Idris on as he announced on Monday, March 16, that he had Coronavirus (read here), and many believed that she should have been quarantined away from him since she had not been tested at that time.

The actor went live on Twitter and explained how he is feeling after being diagnosed with COVID-19. He also addressed the controversy and explained why Sabrina stayed too close to him.

He said: “Yesterday was good and bad. Bad because I tested positive, but it was also good because it opened up a lot of conversation around it. I think it made it a lot more real for some people. Definitely made it more real for me and my family.

“There was so many positive responses to, you know, me talking about it. Some negative too. But there were some definite positive ones. I certainly felt…my wife and I felt like it was the right thing to do, to share it with you guys.

“Right now though, I am feeling okay. Woke up this morning, didn’t have any symptoms. My voice is a little tired…checking my fever twice a day. Feel good, feel okay. Been doing a lot of reading about it. You know, asymptomatic is what comes up.”

Addressing the controversy over his wife being beside him despite how contagious the virus is, Idris said, “Sabrina‘s good too. Sabrina today finally managed to get a test, and we’re thankful for that. Generally, Sabrina‘s fine. Nervous of course. Worried. Just for clarification, Sabrina wanted to be by my side.”

He continued, “We calculated that risk and decided to be together. Hope you guys can understand that.”

He explained that they figured she probably had it as well after his diagnosis. He also added it meant the world to him to have her support.

1,766 people are talking about this

2,149 people are talking about this