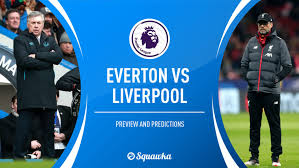 “The performance was good; we did well defensively. We didn’t concede opportunities, we were focused. We had a big chance to win but against a strong team we showed good character and personality.”21:41

“If Liverpool were at full strength it would have been different. Today they played into Ancelotti’s hands – everything was in front. Minamino, Mane were coming into the same position. Klopp fixed it in the second half but Coleman’s defending was fantastic.”

Here’s the full interview with the Liverpool boss…

“Of course we want to make more chances; we have to more clear in situations – pass the ball, shoot in the right moment, more crosses.  The second half we started to do that better but Everton defended really well; they tried to take care of Sadio and Trent and we were not smart enough to use the space for somebody else. That’s normal when you begin to play again but a lot of things very good. Physically I liked it.

“You saw the derbies we had here before – they were never really better, I have to say! Each team is fighting like crazy so in the end there is not a lot of football. There is space for improvement for us here at Goodison; I like football when it’s slightly different but that’s how it is; we had a proper fight, it was intense and we were ready for that.

“Now I know we are ready because you don’t know 100 per cent if we did enough (during the break), but we can involve fresh legs on Wednesday. So far, so good but I saw Crystal Palace yesterday and they looked like a well-oiled machine. It will be tough.”

“The front three are as good as anyone in Europe but whenever one of them is out, there is a massive drop off. When Liverpool dropped points at Manchester United, Salah wasn’t playing. That’s why Liverpool need to strengthen the front three. Divock Origi is a legend for Liverpool as he’s scored big goals at big moments but doesn’t have quite the quality. Is Minamino part of the front three? Not for me. The front three are very robust and don’t miss many games but if Liverpool were to lose one of them, especially the two wide players, for a lengthy amount of time they could have a real problem next season.”

“We had a few chances but it wasn’t our day.”

“It was a real fight. Both teams showed that they understand it’s a derby – even without a crowd. It was intense, physical, all-in.

“The players were really in the game, so that’s good. I really liked our defending.; the high press, midfield press, counter-press good. We won a lot of balls.

“We didn’t have a lot of chances; most of the time we were dominant but they had the biggest chance – that’s how it is. It came out of the blue. We were lucky in that moment but apart from that, we were in control.”

MAN OF THE MATCH