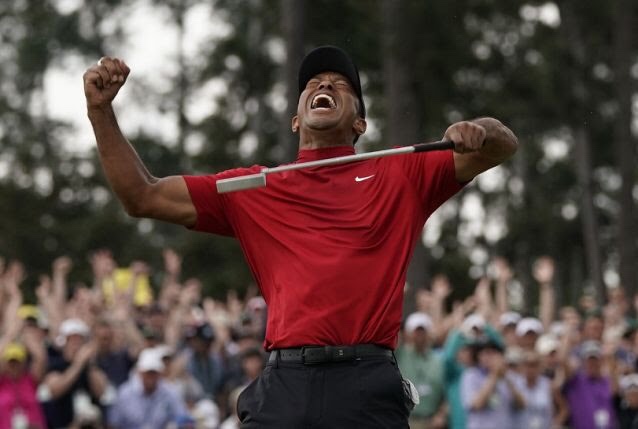 Tiger Woods completed a comeback from personal and professional adversity on Sunday, capturing his fifth Masters title and his 15th major tournament with a victory that snapped a decade-long championship drought and instantly returned him to the top of the sports world.

It was a monumental triumph for Woods, a come-from-behind victory for a player who had had so much go wrong on the course and off after his personal life began to come apart on Thanksgiving night in 2009.

As such, it was only fitting that after he walked off the 18th hole on Sunday, his one-stroke victory secure, his path to the official scoring office was gridlocked with well-wishers, including many of the golfers he vanquished over four grueling days at Augusta National Golf Club.

Woods triumphed in almost stoic fashion, playing with shrewdness and determination over the final stretch of holes while the other players who were grouped with him on the leaderboard took turns succumbing to the pressure of trying to win the Masters.

And although Woods did bogey the final hole, he did so with a two-stroke lead, victory in sight and the knowledge that he could give one of those strokes back and still win the tournament.

Only when he tapped in his final putt did Woods let loose with a joyous shout that revealed how much the victory meant to him.

At 43, Woods became the second-oldest winner of the Masters, behind Jack Nicklaus, who won here in 1986 at age 46 and who holds the record for victories in major tournaments, 18. And Woods’s victory immediately reverberated beyond golf and, for that matter, sports.

The win even led to a rare moment of agreement between President Trump and former President Barack Obama. “What a fantastic life comeback for a really great guy!’’ the President said on Twitter. “To come back and win the Masters after all the highs and lows is a testament to excellence, grit and determination,’’ Obama posted.